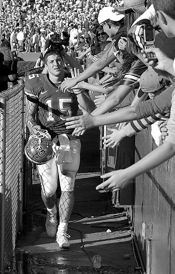 College football stars normally don’t suit up on Super Bowl Sunday, but former Heisman-Trophy-winning quarterback Tim Tebow of the University of Florida will be making a controversial appearance during this year’s game—in an anti-abortion ad paid for by Focus on the Family. Tebow, who led the Gators to two national championships, will appear in the spot with his mother, Pam, as she shares the story of her decision to go through a difficult pregnancy and have Tim, instead of aborting him back in 1987 (via ABC News). Michael Hiestand of USA Today writes that the Tebow commercial could be “the only really controversial ad—to ever air during America’s biggest TV show,” which should add to the game’s big ratings. Commercial space during the CBS broadcast of the Super Bowl is selling for $2.5 million per spot. Focus on the Family, an evangelical ministry based in Colorado Springs, says money for the ad came from a few generous donations, not its depleted general funds. The ad’s theme is “Celebrate Family, Celebrate Life,” and spokesman Gary Schneeberger tells ABC the Tebows are “strong, committed Christians.”

The ad has women’s organizations and others questioning CBS’ advertising policies and judgment. A coalition, including the National Organization for Women and Feminist Majority, have asked the network to pull the message. “An ad that uses sports to divide rather than to unite has no place in the biggest national sports event of the year—an event designed to bring Americans together,” says Jehmu Greene, president of the Women’s Media Center (via the Associated Press).