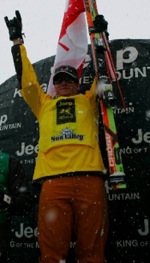 Among Colorado skiers headed toward the Olympics, Vail’s Lindsey Vonn takes most of the spotlight. It makes sense, since she’s probably the best female downhill skier in the world, but other Coloradans are offering up some compelling stories as we head into the home stretch of the next Winter Games.

Case in point is Chris Del Bosco, a 27-year-old recovering alcoholic vying for the chance to compete in ski cross, a downhill roller derby on skis, which will make its Olympic debut in Vancouver. Riders jostle with each other as they navigate hairpin turns and fly off jumps on their way down the course. The sport is an apt metaphor for Del Bosco’s life, which is explored in a lengthy profile from USA Today.

Del Bosco grew up a gifted skier in Vail only to face the demon of alcohol abuse. Six years ago, a passer-by found Del Bosco in a frozen creek bed with a broken neck, a low body temperature, and no memory of what had happened. A few years later, he served time for a third DUI, and just yesterday, he claimed his first World Cup win of the season in France.

He would be competing for Canada, his father’s native land, but the head coach of Canada’s ski cross team has told Del Bosco that one slip with booze will get him thrown off the team. Del Bosco’s not guaranteed an Olympic spot. He’ll find out next week about his chances of making the Canadian squad.