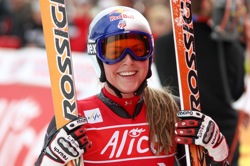 Vail’s Lindsey Vonn continued her dominance of the downhill ski circuit today, earning her seventh win of the season in a World Cup super-G in Cortina D’Ampezzo, Italy.

The Canadian Press reports that Vonn skied a nearly perfect run from top to bottom on her way to reclaiming the lead in the overall standings. She had been on a minor slump of late and was headed into today’s race coming off three technical races in which she failed to gain a single point in the standings.

But with today’s win, and with 13 races left in the season, she’s in a good position to best her total of nine wins a year ago. While Vonn is trying to keep things in perspective, others are boldly declaring that she’s a lock to win it all in Vancouver. She could win up to five medals, notes the Associated Press, which is ready to dub the upcoming Winter Games the “Vonncouver” Olympics in her honor.

Indeed, Vonn is at the center of a media circus that is honed in on minutiae like which helmet she’ll wear. The New York Times reports that she’s narrowed her choices down to three, and now people can vote for the winner at NBCOlympics.com. In the running for the winning design is Carolyn McHale of Boulder, who combined snowflakes with a stars-and-stripes motif.