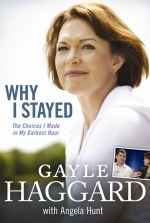 In her new memoir, Gayle Haggard writes that it was difficult to forgive her husband, Ted Haggard, after she learned of allegations about his relationship with a male prostitute and his dabbling with drugs. But she stood by her husband because that’s simply the Christian thing to do, according to the book, Why I Stayed: The Choices I Made in My Darkest Hour, which she co-wrote with Angela Hunt (via The Denver Post). The memoir’s official release is January 26, but it was available recently at the Barnes & Noble store on Denver’s 16th Street Mall. Gayle soon learned many of the allegations about her husband were true and tossed “spadefuls of guilt onto Ted,” who considered suicide at one point. “You should divorce me. I’m so toxic, Gayle, I’ll ruin you,” Ted, the founder of New Life Church in Colorado Springs, told her. “You and the kids could leave me. The church would take you in and help you.”

Though she was upset about his attraction to men, she was also partly thrilled that her husband finally decided to trust her with the truth. Last November, Ted Haggard announced he was returning to Colorado Springs to begin prayer meetings at his house.