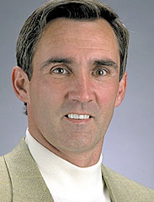 Don’t tell former Denver Broncos head coach Mike Shanahan that we’re in a recession. The always-tanned coach collected a cool $7 million this season, money paid to him by the Broncos as part of a severance package after he was fired at the end of last year’s woeful season.

But as of yesterday, Shanahan is officially back at work, after signing on as the new Washington Redskins head coach—with a salary rumored to be as high as $10 million annually (reports vary). He’ll also collect $3.5 million each of the next two years from the Broncos as part of his continued severance package (via Sporting News).

Shanahan may pluck some of the Broncos’ coaches for his new staff, including long-time running-backs coach Bobby Turner, who came to Denver with Shanahan in 1995, reports The Denver Post (free registration required).

Whatever happens with Shanahan, The Washington Post thinks he’ll run the Redskins just as he did the Broncos. In a sprawling profile, the paper paints the picture of a control freak, a man so obsessed with running the show that he installed cameras in Broncos’ team meeting rooms so he could watch position coaches interact with players and other team personnel (free registration required for the full story).

Still, many people in Denver appreciated Shanahan’s zeal for the game and running the team, even if they didn’t like some of his decisions. The Associated Press points out that Shanahan made the playoffs in half of his 14 seasons with the Broncos and clocked just two losing seasons. Shanahan will likely remain a presence in Denver, maintaining his palatial Cherry Hills estate and other business interests.

Just don’t try to partake in one of those interests tonight. The Baltimore Sun reports that Shanahan’s, the coach’s Denver Tech Center-based steakhouse, is closed tonight for a private party.