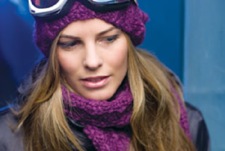 By now most of us know U.S. snowboarder Shaun White has defended his gold medal in the men’s Olympic halfpipe, spinning and flipping his way down.

The New York Times points out that Colorado has served as White’s training ground, where he perfects his tricks on a private halfpipe near Silverton. He’s also paid homage to the state by naming his double McTwist 1260 the “Tomahawk,” after a 30-ounce T-bone steak he recently ate in Aspen.

White came close to a devastating injury in an attempt of the “Tomahawk” at the Winter X Games in late January, when he hit his head on the side of the halfpipe. He was OK, but it served as a reminder that progress in the sport of snowboarding can come at a steep price. That’s something last night’s women’s Olympic halfpipe gold medalist, Torah Bright of Australia, knows all too well.

Bright (pictured), along with Americans Hannah Teter and Kelly Clark, finished first, second, and third, respectively, by pushing the limits at the Winter X Games in Aspen. In a December 2009 article for ESPN, Bright told me she had her own version of the double cork 900, a truly revolutionary move for women’s snowboarding. She wanted to land it for the first time in competition in Aspen but knocked herself out of the Winter X Games with two concussions in three days.

She ended up winning last night’s gold medal in Vancouver without her double cork, relying instead on big, technical spins and the most air of any woman in the competition.

Aspen’s Gretchen Bleiler, coming off her third Winter X Games gold medal in January, told TV Guide she would try to land the first-ever 1080 in women’s competition in Vancouver last night. She didn’t and ended up falling midway through her run, finishing a disappointing 11th.