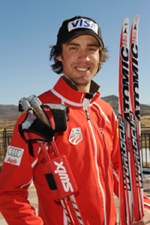 The 2010 Winter Olympics kicked off Friday night, and before the weekend was over, Colorado claimed its own medalist. Steamboat Springs’ Johnny Spillane took the silver medal in the Nordic combined, the first-ever Olympic medal in the event for the United States, according to The Denver Post.

The event pairs ski jumping with cross-country skiing, and Spillane came less than a second away from winning the gold medal after finishing just behind Jason Lamy Chappuis of France.

Locals were cheering on other U.S. competitors this weekend, as well. California’s J.R. Celski took the bronze medal in the short-track speed skating race Saturday, cheered on by a group of five Colorado Springs medical workers.

The physical therapy staff from the U.S. Olympic Training Center’s sports medicine facility helped rehabilitate Celski’s right leg after he cut it to the bone in a September 2009 crash in Michigan. The Seattle Times writes that the therapists were so excited during Celski’s race they could barely stay seated.

The most famous Colorado Olympian in Vancouver, Lindsey Vonn, rocked the Games last week when she revealed a shin injury might prevent her from racing. But thanks to foul weather, which has given her added time to heal, her fortunes may have been reversed: The Associated Press reports that Vonn is feeling more confident on her skis and is almost certain to race later this week.

Meanwhile, Colorado College professor Daniel Johnson has a 94 percent accuracy rate of predicting which countries will win Olympic medals, notes Bloomberg. He says Canada will win the most, with 27, and the U.S. and Germany will tie for second with 26.