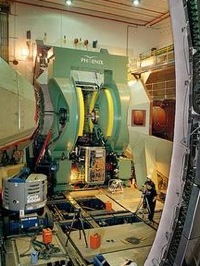 Jamie Nagle and Edward Kinney, two physicists for the University of Colorado, have created the hottest matter ever measured by man: 7.2 trillion degrees Fahrenheit. That’s 250,000 times hotter than the Sun and even more toasty than a supernova explosion. The team, working at the U.S. Department of Energy’s Brookhaven atom smasher in New York, are exploring what the universe was like just microseconds after the theoretical Big Bang 13.7 billion years ago—the event that created all known matter in the universe. To do so, they are colliding charged gold particles billions of times over to melt protons and neutrons, creating a soup from subatomic particles dubbed “quark-gluon plasma,” according to Boulder’s Daily Camera. In 2001, two Nobel Prize physicists at CU achieved the lowest temperature ever recorded at the time by cooling rubidium atoms to less that 170 billionths of a degree above absolute zero, causing individual atoms to form a “superatom” that behaved as a single entity.

“It is very exciting that scientists at the University of Colorado are world leaders in laboratory studies of both the coldest atomic matter and now the hottest nuclear matter in the universe,” says Nagle, spokesman for a 500-person scientific team, in a statement from CU. Later this year, physicists from the school hope to use the Large Hadron Collider in Switzerland to ram ions together to create even hotter temperatures.