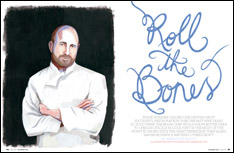 Denver is holding its own when it comes to supporting key industries, according to the latest annual survey from the Metro Denver Economic Development Corporation.

In particular, the report highlights the region’s strong growth in the aerospace industry, and its high per-capita job rates in technology, telecomm, and financial services. The study doesn’t include an analysis of the beverage and data-hardware industries, because, “We’re focusing on those industries where we have a competitive advantage,” says Vicky Lea, aviation and aerospace industry manager for the Metro Denver Chamber of Commerce (via The Denver Post).

Food services weren’t worthy of the study either, but several area restaurants are earning some serious recognition. A dozen Colorado chefs and restaurateurs have been nominated for the 2010 Restaurant and Chef Awards by the highly regarded James Beard Foundation (via Westword).

Among 20 nominees around the nation up for Outstanding Restaurateur are two Denverites: Chipotle CEO Steve Ells and Frank Bonanno, the executive chef-owner of Bones, Luca D’Italia, Mizuna, and Osteria Marco, whom 5280 food and restaurant editor Amanda M. Faison profiled expansively for the magazine in December 2009. Even more impressive is Colorado’s showing in the Best Chef: Southwest category, where the state has nabbed six of the 20 nominee slots.

Award finalists will be narrowed down in March, and the winners will be feted at a May 3 gala in New York.