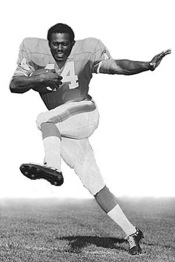 The announcement of inductees to the 2010 Pro Football Hall of Fame is a mixed bag for Denver Broncos fans. Floyd Little, a running back with the team from 1967-75, was up for his last shot at the honor—and finally made the cut. He tells The Denver Post (free registration required) he fell to the floor when he heard the news, relieved after 30 years of waiting for the distinction.

Little retired in 1975 as a decorated player. The six players ahead of him on the list are already in the Hall of Fame, and as the Post points out, all of them played on teams with much more stability from their quarterbacks and offensive lines.

But not all Broncos-related news from the Hall of Fame was good this weekend. Longtime tight end Shannon Sharpe retired in 2003 as his position’s all-time leader in touchdowns, catches, and receiving yards. He has three Super Bowl rings with two different teams and is one of the best smack-talkers of all time. But that apparently wasn’t enough to be inducted.

It was Sharpe’s second chance, and he tells the Post he’s disappointed, but Broncos owner Pat Bowlen isn’t as polite about the snub.

“That really ticks me off,” he says. “Shannon not getting in—there’s no justice.”

Sharpe has a few more opportunities and is thought to be a solid choice in the next couple years.

Meanwhile, the present iteration of the Broncos keeps rolling toward the 2010 season. The constant on-again, off-again drama with wide receiver Brandon Marshall has a new wrinkle, as coach Josh McDaniels tells CBS4 that despite all the turmoil, he wants Marshall back in 2010. This comes a few days after Marshall said publicly that he wanted to return to the Broncos in 2010 and perhaps even retire in Denver (via Pro Football Weekly). But like most sports watchers, we’re still skeptical.