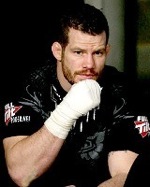 Denver’s Nate Marquardt isn’t incredibly imposing at 6-feet-tall and 185 pounds, but the guy is a bruiser and will likely prove it again tomorrow during the Ultimate Fighting Championship 109 at Mandalay Bay in Las Vegas. The mixed-martial-arts fighter is looking to take the top middleweight spot, if he can get past Oregon’s Chael Sonnen.

Marquardt tells The Denver Post he’s evolved and is prepared to lay it all on the line. In the past, he says, he fought conservatively, looking to simply earn a decision. Now? It’s all about going after knockouts and submissions. If he can accomplish that against Sonnen, he’ll earn a rematch of the 2007 middleweight title bout against Brazil’s Anderson Silva.

Bleacher Report calls Marquardt “the great one,” noting that he’s better in virtually every aspect of mixed martial arts except classic wrestling, and adding that he’s a “lethal, all around warrior.”

But Sonnen is no pushover. He’s also just one fight away from a title bout, and Bleacher Report writes that he’s in a “kill or be killed” mind frame. Sonnen is an interesting character in his own right, recently unveiling his Republican candidacy for a state legislative seat in Oregon (via USA Today).

In another article, USA Today calls the Marquardt-Sonnen bout the most impressive on the card. The paper has Marquardt ranked as the number two MMA fighter in the UFC, although it points out that both fighters have broad arsenals.