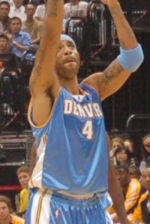 Carmelo Anthony’s return to the Denver Nuggets after an ankle injury was delayed over the weekend, and the team really felt his absence Friday night. The Oklahoma City Thunder thumped Denver, 101-84, ending the Nuggets’ eight-game winning streak. The score was Denver’s lowest all season and had teammates pining for Melo’s sprained left ankle to heal.

“We were missing 30 points,” Kenyon Martin tells The Denver Post. “Who’s to say it would’ve helped? We don’t know. But you can’t make excuses. It’s a basketball game.”

The Nuggets’ overall success has allowed the team to move slowly with Anthony and other players recovering from injuries, writes the Post, in a separate article. Martin (pictured) scored 27 points to help make up for the void left by Anthony on Sunday, when the Nuggets beat up the Spurs in San Antonio, 103-89 (via ESPN).

Denver Stiffs points out that the Nuggets have won both games in San Antonio this season, a sign that “Denver is no longer the Spurs’ ‘Little Brother.'”

The Nuggets are 3-1 without Anthony in the last week, but he’s expected to play tonight when Denver comes home to face the Sacramento Kings.