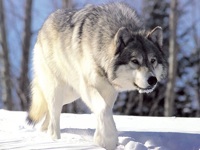 In the 1930s, trapping and poisoning wiped out wolf populations in Colorado, and only in recent years have federal authorities attempted to restore the animal to its Western habitat. The state has watched closely: The animals are controversial with ranchers, while conservationists are largely supportive of the cause. In recent years, at least two wolves from a program in Wyoming’s Yellowstone National Park area have crossed the Colorado border, including one whose carcass was found in Denver along I-25 in 2004. Now, biologists are finding many possible signs that the wolves are among us—animal droppings—which have been sent to the University of California-Los Angeles for DNA tests, reports The Associated Press. Colorado Division of Wildlife officials are consulting with the High Lonesome Ranch, a place that offers hunting and fishing excursions north of DeBeque, about 200 miles west of Denver, where wolves have also been sighted. But “we take observations at face value,” says Ed Bangs, a U.S. Fish and Wildlife Service biologist. “We’ve got a system that will figure out for sure” if wolves are in the area. High Country News has also attempted to trail the wolves, trudging the meadows with a biologist in search of unusual animal poop, discovering one dropping that contained hair from deer or elk and shards of bone.