It’s been more than three years since Denver Broncos defensive back Darrent Williams (right) left a downtown Denver nightclub and was killed a few blocks away when the limo he was riding in was sprayed with bullets. The trial of one of the accused shooters, Willie Clark, is now finally set to begin, with opening statements coming as soon as tomorrow (via Fox31). Clark is charged with 39 counts, including premeditated murder. The shooting occurred in the early hours of January 1, 2007, after a New Year’s Eve party at a downtown nightclub, which was also a birthday party for the Denver Nuggets’ Kenyon Martin. A confrontation between Broncos wide receiver Brandon Marshall and Clark’s group of friends apparently precipitated the shooting, and several current and former Broncos find themselves on the witness list in the case. Marshall (left), Elvis Dumervil, and D.J. Williams are among them, along with former players Javon Walker, Karl Paymah, Nate Webster, and Demetrin Veal (via Examiner). Of them, Marshall is likely to play the largest part from the witness stand. 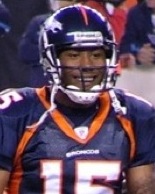 In fact, Marshall’s role may be driving a seemingly unrelated Broncos storyline that’s been festering for more than a year. Marshall’s desires to play for another team have been publicized in the past, and his sometimes erratic behavior with the team has been blamed on immaturity and greed. But Mike Klis of The Denver Post (free registration required) speculates that guilt from his role in the incident is driving Marshall’s on-again-off-again desire to leave Denver. Klis believes the truth was revealed when Marshall was pulled over for drunken driving and said, according to an officer, “I hate Denver. I hate this (bleeping) city. Why aren’t you guys looking for Williams’ killer?”

The Post notes in a separate article that the trial will shine a light on area gang activity, as Clark was allegedly a member of the Tre Tre Crips gang. The shooting pits a group of moneyed athletes against a group of men prosecutors describe as “crack-dealing gangsters.” Although the case transcends the sports world, watch for it to have an impact on the Denver Broncos, as well.