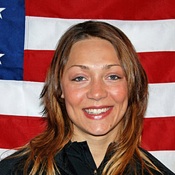 Colorado native Katie Uhlaender heads into Vancouver this weekend as a decorated World Cup champion skeleton racer, but the 25-year-old’s off-the-track story just might be more inspiring, as Devon O’Neil discovered for the magazine this month.

The Breckenridge resident broke her kneecap twice last year, an especially tough injury for an athlete who relies on leg power for explosive starts out of the gate. She’s had just eight full weeks of training for her second Olympics but says she’s going to Vancouver with a strong mindset.

She credits her late father, former Major League Baseball player Ted Uhlaender, with teaching her everything she needs mentally to persevere at the Games. The Los Angeles Times expands on Uhlaender’s story, delving deeper into her father’s death from cancer and its impact on her. Friday, the day of the Games’ opening ceremonies, is the one-year anniversary of his passing.

Uhlaender tells the Times she could use another year to heal and recover, both emotionally and physically, but her dad would have encouraged her to tough it out—and she will. Her teammates call her perhaps the toughest competitor they’ve ever met.

“In a confrontation between Katie and a brick wall, bet on Katie,” says bobsled driver Steve Holcomb.

Uhlaender will be wearing her father’s World Series ring around her neck.

“I’m not going to make excuses, and I’m not going to complain,” she says. “I’m going to do the best I can and try to represent my country and my family and do what I know how to do.”