While most of the local highlights from the Winter Olympics have been focused on Vail’s Lindsey Vonn, who’s earned a gold and a bronze medal, other Colorado athletes are making headlines from Vancouver. Like Winter Park’s Ryan St. Onge, who qualified for the finals in men’s freestyle aerials yesterday (via the Los Angeles Times).

One of the most visually interesting winter sports, freestyle aerials has skiers throwing themselves off large jumps with flips and spins that boggle the mind. USA Today points out St. Onge (right) is ranked second among the 12 finalists and is in a prime position to claim a medal.

Also watch out for Steamboat’s Todd Lodwick, who will go for gold in the skiing team relay today. The Associated Press notes that he’s the only five-time U.S. Olympic skier and wants to end his career on top. 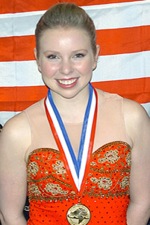 Another Colorado athlete to keep an eye on is Colorado Springs’ Rachael Flatt, one of the American figure skaters under a lot of pressure in Vancouver. The New York Times writes that Flatt and teammate Mirai Nagasu are trying to keep a crazy streak alive: The U.S. women have won a medal in figure skating at every Olympics since 1968, and Flatt has the consistency to make the podium.

Flatt, a straight-A senior at Cheyenne Mountain High School, checked into the Olympic Village in Vancouver last week, then flew home for three school days and four advanced-placement classes before flying back to Vancouver ahead of today’s short program. She admits she needs to work on the artistic aspects of her routines, but her spins and tricks are among the most consistent in women’s figure skating.

She’s been working with 1976 Olympic champion Dorothy Hamill to be more expressive, and Hamill thinks Flatt has a good chance to succeed on the ice and in life in general.

“We never put Rachael’s education on the back burner for skating,” says her mother, Jody Flatt. “School isn’t a backup plan. It’s a life plan.”