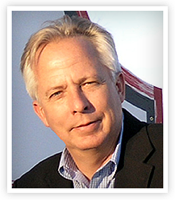 Diggs Brown, one of several Republicans seeking to unseat freshman Democrat Betsy Markey in Colorado’s Fourth Congressional District, has “offered an apology of sorts,” writes the Fort Collins Coloradoan, after the Fort Collins city councilman wrongly asserted that U.S. House Speaker Nancy Pelosi committed the near-treasonous act of diverting a 757-like U.S. military aircraft in Africa for her personal use.

“Talking about Nancy Pelosi’s excessive travel expenses, I included some incorrect information about the specific type of plane she uses and exactly how much taxpayer money she’s been spending,” Brown now says.

“She uses luxury Gulfstream jets, not the converted 757s, and she racked up $2.1 million in travel costs over two years. As you can see, the facts stand on their own as objectionable to taxpayers, and no malice was intended on my part. But my parents told me that when you screw up, you admit it. I screwed up the numbers, and for that I apologize.”

Brown, who made the initial comments in Denver last Friday, also accused Pelosi of spending $100,000 a month “for booze,” adding, “I can understand Mr. Pelosi having a drinking problem” (via the Coloradoan). Brown’s statement about the plane echoed e-mails that the Air Force has refuted and that nonpartisan fact-checking organizations have debunked for years.

“These lies and dishonorable distortions are exactly what we expect of Republicans in a competitive primary. Coloradans deserve better,” says Andy Stone, a spokesman for the Democratic Congressional Campaign Committee.

The Coloradoan takes a look at the lot of GOP candidates competing in the race, which also includes Cory Gardner, Tom Lucero, and Dean Madere.