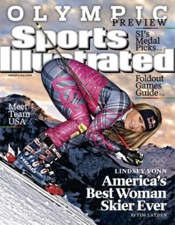 The Sports Illustrated cover jinx has reared its ugly head again, this time claiming Vail’s Lindsey Vonn. Just days after SI declared her “America’s Best Woman Skier Ever,” Vonn now says she has a shin injury that may keep her from competing in the Winter Olympics.

The Washington Post reports that the tenor around the entire U.S. Olympic team has changed, since “the marquee athlete of the Vancouver Games” may not be able to participate.

Vonn told a rapt audience of worldwide media that the pain in her shin is “excruciating” after suffering a deep muscle bruise in Hinterreit, Austria. She doesn’t believe the injury is structural, but she refused to have an X-ray after the crash for fear of hearing the results.

Vonn’s spectacle of a press conference yesterday underscores the degree to which she’s overshadowing all the other athletes. And the Los Angeles Times points out the uncomfortable truth: In the U.S., female athletes earn fame and fortune more for their looks than their athletic prowess.

Seated to Vonn’s left during the press conference was teammate Julia Mancuso, the 2006 women’s giant slalom Olympic gold medalist. After initially saying she liked all the shine Vonn has been getting in the past few weeks, she admitted it was “weird” that Vonn was the one featured on the SI cover even though she hasn’t won an Olympic medal. Not that any of this is necessarily Vonn’s fault. But there are seven other skiers on the team who are healthy and ready to go.

Yahoo! Sports’ Dan Wetzel does a good job rounding up several other storylines for us to follow during the Olympics. Still, The New York Times notes that NBC, the Olympics broadcaster, doesn’t really care about those other stories. It’s all about Vonn, and without her, the absence of hype over the next couple weeks will be notable.