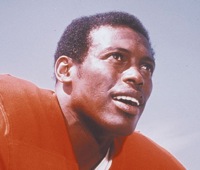 The Internet has been alight with opinions about news of former Denver Broncos running back Floyd Little finally making it into the Pro Football Hall of Fame.

Many locals think it’s high time, including Westword’s Michael Roberts, who writes, “There’s no doubt the squad’s slow rise from mediocrity to competitiveness can be traced directly to him.” Still, some national writers are making a lot of noise on the other end, claiming Little doesn’t deserve the honor.

Take Jason Whitlock of The Kansas City Star, who argues the NFL Hall of Fame selection process is fundamentally flawed, calling it “un-American,” “journalistically unsound,” and “cowardly.” Whitlock criticizes Little’s 6,300 total yards and 3.9-yards-per-carry average over his nine-year career, as well as the fact that Floyd never played in a postseason game.

Syracuse.com, a blog based in the hometown of Little’s alma mater, is glad he made it to the Hall, but isn’t all that surprised he had to wait 30 years, saying it’s justified. The Santa Rosa Press Democrat calls Little’s entry a “pretty shaky selection, actually.”

Perhaps the best discussion of the controversial decision comes from Sports Illustrated’s Peter King, who doesn’t support Little’s entrance to the Hall but appreciates the way Denver Post Broncos reporter Jeff Legwold made the case for Little to the selection committee. Legwold told the committee Little was first hit behind the line of scrimmage on 30 percent of his runs, “an amazing number,” King writes. Legwold also convinced enough committee members that Little was a great runner on a series of bad teams.

And at the end of the day, most of us here at home agree with Legwold—that Little deserves his spot in Canton.