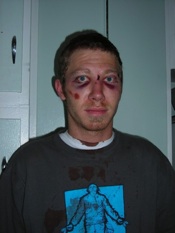 Eric Winfield’s Facebook profile pictures aren’t pretty. They show him with two black eyes, stitches across the bridge of his nose, scrapes on his cheek, and blood stains on his shirt. This, he claims on the fan page Justice for Eric Winfield, is what may happen when Denver police officers decide to take you down—even if you’re doing nothing wrong. Think of Winfield—an artist who was arrested in October 2007 near a brawl at 14th and Market streets in LoDo and subsequently charged with felony assaulting an officer and resisting arrest—as a growing public relations problem for Denver police. He now has more than 150 “fans” on the site, which includes a synopsis of his ordeal:

“Confused and shocked, Eric laid on the sideway [sic] as he was repeatedly hit [by police officers] in the face, kicked in the ribs and crotch, and kneed in the back. He was then handcuffed to the gurney of the Denver Health ambulance where he was left for hours without any medical assistance. After a long night of being ignored at the hospital, he was then thrown in the felony ward of the Denver Police Station for a day and a half.”

In March 2008, criminal charges against Winfield were dropped, although his complaint to the police’s Internal Affairs Unit went nowhere, according to Westword. He is now suing the city after suffering permanent nerve damage to his hand and shelling out big bucks to pay lawyers to help him with the mess. Winfield admits he had a few drinks the evening he was beaten but maintains he did nothing to provoke the officers. His friends provide similar accounts of the incident.