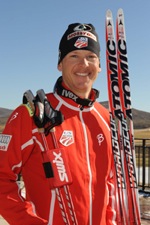 In the 2002 Salt Lake City games, the team placed second in the jumping event but fell apart in the cross-country event and finished fourth overall. In 2006 in Turin, Lodwick (pictured) finished eighth and ninth in the individual event, and the team didn’t do much better, finishing seventh overall.

Lodwick didn’t think he’d have another shot, and retired after the Turin games. He came back two years later, and that was clearly the right decision.

This is the Americans’ second medal in as many nordic events, after Steamboat’s Johnny Spillane became the first American to win a gold in the individual combined last week. The team’s silver medal helped the U.S. maintain its three-medal lead over Germany for the overall medal total (via NBC.com). The U.S. sits in the lead with 26 medals, compared to 23 for Germany, and 17 for Norway. Canada rounds out the top five with 11 medals, something that may be getting under the skin of our friends to the north.

The Seattle Post Intelligencer has noticed the tension and politely asks Canadians to “relax, eh.” The way Canadian athletes are crumbling under massive home-crowd pressure is coming off “way too neurotic”—a lot like Americans—writes the paper.