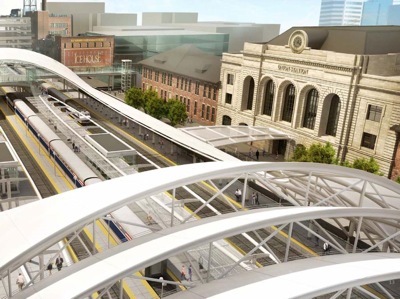 The Denver metro-area’s vast light-rail dream took a step closer to reality as the Federal Transit Administration announced $304 million in loans to convert Denver Union Station into a regional commuter rail hub. The FTA’s administrator, Peter Rogoff, says additional millions in grants for two commuter rail corridors—Denver International Airport and Arvada-Wheat Ridge—in President Barack Obama’s proposed 2011 budget should be taken as a clear signal that the region’s rail dreams are on track, notes Kevin Flynn at Inside Lane. Rogoff told a crowd of about 200 people at the Union Station transit platform the money would mean “thousands of jobs” locally. The grants and loans are expected to spark a new round of development in LoDo, clearing a major obstacle that stood in the way of construction in the surrounding area, private developers claim. But the loan won’t exactly trigger a building spree in the difficult market for commercial projects, reports The Denver Post. “Everybody knows that eventually Union Station will get developed, but this doesn’t automatically translate into real-estate development,” says Randy Nichols, president of Nichols Partnership. “The market dictates what can get built.” He adds, however, that the loan announcement gets “us over the hump.” Photo courtesy denverunionstation.org.