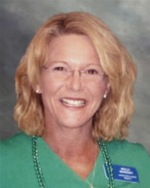 Last month, Lamar Advertising in Colorado Springs rejected a bus shelter ad featuring images of a racy pink puppet from an off-Broadway show because there was too much cleavage. Now, a banner for Perky Cups, the Aurora coffee shop with bikini-wearing baristas, has been taken down for showing a smiling blond woman in a bikini top holding a latte. The owners of the coffee shop reluctantly decided to take down the ad after some people complained, including City Councilwoman Molly Market (right), who called the picture on the banner “degrading to women,” according to the Aurora Sentinel. “Obviously, if we’re going to have this much complaining over it, obviously we’re just going to be a good neighbor and take it down,” Jamie Bernal, who owns the shop with her husband, tells 9News. Though a moot point now, there was some debate as to whether the ad was legal, but Robert Rogers, a city attorney, settled that matter by reminding everyone the content is protected by the First Amendment.