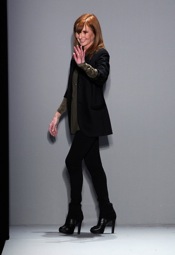 Recognized as one of the preeminent designers working in American fashion today, Nicole Miller was in Denver recently to help the city’s own Garbarini celebrate its 25th anniversary. Known for her use of prints and her ability to cut and drape sexy dresses, Miller is equally adept at tailoring: Witness her pleated biker jackets for spring and menswear-inspired blazers for next fall. Miller took some time out of her busy schedule to talk with me about her collections, design inspiration, and current fashion-industry issues. 5280: To me, spring really hit the right vibe of balancing sporty with modern dressing. How would you describe your spring 2010 collection and the inspiration behind the prints? Nicole Miller: [Regarding the prints] I was thinking a little bit about Apollo 13 (ed. note: this spring is the 40th anniversary of Apollo 13) and what the view from the spaceship was coming back to Earth. The prints were all done with digital technology. As for the collection, I’m not a girly girl, and I feel like we’ve seen a lot of ruffles over the last few seasons. My clothing is sexy, tailored, and urban. 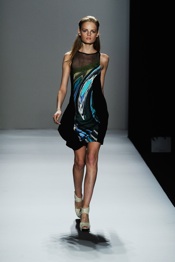 5280: Because there are really no rules to dressing any more, do you think it’s difficult for women to decide what to wear or how to create a look? NM: Absolutely. Everything is the trend, and its confusing for the customer. For example, it used to be you could only wear shoes for a season or two, but now I feel like I can wear shoes for four or five years without looking dated: Wedges are in, platforms are in, ballerinas are in. I say figure out what are your best attributes, and dress to show off your best parts. 5280: Let’s talk about the state of fashion today. How do you think the current economy has or has not influenced your designing? NM: Some clothing prices are obscene, but I always think my prices are reasonable. I use Italian fabrics, and I think my value is good. But there has always been competition at every price point, and that hasn’t changed. 5280: There seemed to be a number of controversial issues surrounding the New York shows this season. Let’s begin with the issue of model diversity: What do you think about the criticism that there’s not enough model diversity, both race and size, on the runways? 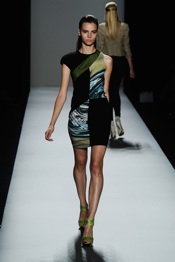 NM: I don’t think people understand how these shows are cast. I probably short-list a pretty diverse pack of between 30 to 40 models each season, but the agencies make demands, like, “If you want this model, you have to take that model.” In the end, I get many of the girls that I want, but not all. Unless you have an unlimited budget, there is no way to get every girl you want. As for models being too skinny, many of these girls are just genetically blessed. I try to not cast girls that obviously have an eating disorder, but if a girl gets cast and works a show, what are you going to tell her? “You can’t go on”? These girls have a limited career as it is, since most are done by the age of 25. I think sometimes people are just jealous of them. 5280: With the shows moving to Lincoln Center next season, what are your feelings about the future of the current show setup? Do you think it’s good for the general public to see fall collections six months in advance when spring has barely arrived in the stores? NM: I won’t have an opinion on the move to Lincoln Center until we actually show there, but hopefully we’ll have more space backstage. But I do agree with Donna Karan—that it makes no sense to be shipping fall at the end of August and markdowns begin in November. 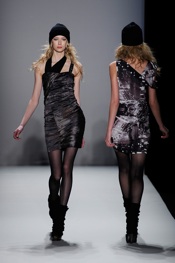 5280: Especially in Denver, where it doesn’t really get cold until November. NM: That’s interesting. Yes, the fall season seems especially short. 5280: Let’s talk about fall 2010. Tell us about your collection. NM: Fall had a lot of menswear-tailored jackets worn with sexy dresses. It was all very city-inspired and urban. The graffiti and cityscape prints were based on pictures we took all around New York City. 5280: What pieces and trends will be carried into next season? And what new items will women need to invest in? NM: Two of my favorite looks are a tunic, leggings, and a short jacket, or short boots with a dress. It looks urban but is still comfortable.