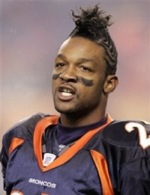 It’s been more than three years since former Denver Broncos defensive back Darrent Williams was fatally shot following a fight at a local nightclub. Yesterday, alleged gang member Willie Clark was finally convicted on 21 counts related to the murder and will likely be sentenced to life in prison next month, reports The Denver Post. The jury deliberated over the course of three days before coming to the final verdict. “My family didn’t win,” says Williams’ mother, Rosalind. “The Clark family didn’t win. I lost my son, my only son, and his children lost their father. This doesn’t bring him back.” Denver Broncos owner Pat Bowlen issued a statement commending the Denver Police Department and the Denver District Attorney’s Office for their members’ hard work, and thanks the community for supporting the Williams family and the Denver Broncos “during this unimaginable tragedy” (via Pro Football Talk). More than a few people are walking away from the trial with a bitter feeling, considering that evidence at the crime scene points to at least two shooters gunning at the limousine Williams was riding in when he died. One of the jurors who was dismissed during the case says he believes Daniel “Ponytail” Harris was the second shooter, but Harris struck a deal with prosecutors to testify against Clark in exchange for immunity.

“I couldn’t believe a damn thing he said,” the juror tells the Post. “He is the second shooter. It sucks that they will only be able to convict one of the two.” That’s the seedy reality of getting convictions in major drug and gang cases, and it seems the Denver DA’s office did what it had to do to secure at least one conviction. Meanwhile, the fact remains that Denver still has a gang problem, and watching one of their own get convicted of murder isn’t going to dissuade most disaffected youth from joining up. Former gang member Terrance Roberts founded the Prodigal Son Initiative to lure gang members off the street and prevent kids from joining in the first place. He tells 9News people know they’re likely to be either killed or incarcerated if they join a gang, but they really don’t care. The Clark conviction won’t scare anybody straight, he adds, but he hopes it will serve as a reminder to the community that more gang outreach and prevention is needed.