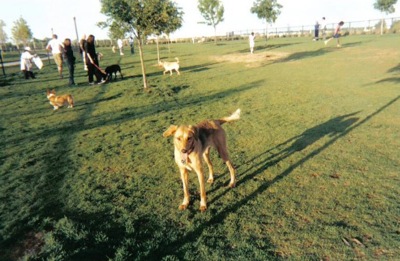 At the moment, six dog parks are sprinkled throughout Denver, and three more are under construction. But to reach a city goal that every resident be within one mile of an off-leash outdoor doggy area, Denver will need perhaps as many as 10 more parks. And that could lead to a small battle over how the limited land should be used. “Even though there is strong demand, other people don’t want to take park land already committed to other uses, passive or active, and give up that turf,” says City Council President Jeanne Robb (via The Denver Post). Parks officials are preparing to release the results of a year-long study of demand at dog parks under a proposed management plan that may well pit dog lovers against residents who’d rather see space dedicated to non-dog purposes.

Meanwhile, Kenai, the Bernese mountain dog mix who barked like crazy one night last year to wake her owners as deadly levels of carbon monoxide seeped into the weekend camping house where they were staying, has received the Valor Dog of the Year award from the Humane Society of the United States, reports USA Today. Had Kenai not been there, “we probably would have been another Colorado carbon monoxide tragedy,” says Todd Smarr, one of the dog’s owners.