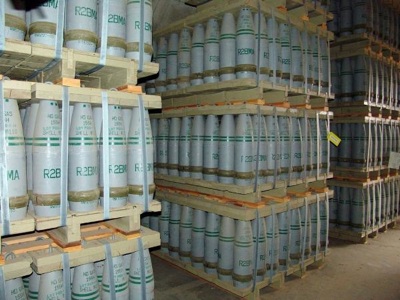 A draft environmental assessment has concluded there would be no significant impact if thousands of highly dangerous mustard weapons at the U.S. Army’s Pueblo Chemical Depot were detonated in specially constructed chambers. The plan, which is open to public comment, represents a major departure from the Army’s initial goal to destroy most of the shells using a combination of water and bacteria in a plant now under construction, reports The Associated Press. Under the new plan, two smaller facilities would use explosives to destroy some shells that are leaking or damaged, as well as tens of thousands of intact shells. Members of the Colorado Chemical Demilitarization Citizens Advisory Commission were aware that roughly 500 leaking weapons secured in steel cylinders could be eliminated in some sort of explosive chamber, but they’re stunned by the enormous scale of the new plan, according to The Pueblo Chieftain. Commission member Ross Vincent, of the Sierra Club, says the Army’s environmental assessment is “inadequate in scope and detail and falls short of the kind of discussion [the National Environmental Protection Act] requires. They need to go back to the drawing board.” Others recently voiced similar concerns, including former Pueblo depot worker Marcello Soto, who does not support detonation out of fear that the chemicals “would get up in the atmosphere or the air, and do some damage” (via Global Security Newswire).