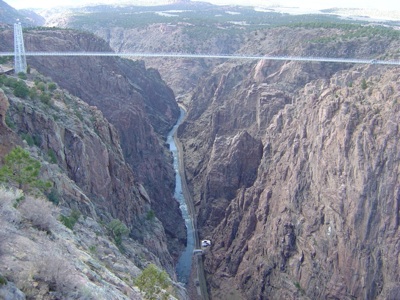 “‘Awe’ doesn’t begin to describe what you’ll feel when walking or driving across the Royal Gorge Bridge, the highest suspension bridge in the world and an unforgettable quarter-mile journey through the clouds,” reads the official Royal Gorge Web site. Unfortunately, Cañon City’s famed suspension bridge hasn’t been the highest in the world since 2003, according to calculations by an Arizona man armed with a laser range-finder and a lot of time.

Moreover, the bridge, built in 1929 to span the Arkansas River as a tourist destination, apparently isn’t 1,053 feet above water either, as has long been advertised. It’s 955 feet, Eric Sakowski tells the Colorado Springs Gazette. Suspension bridges in China today rise higher from the ground, including the current world champ at 1,550 feet over China’s Siduhe River (via Sakowski’s site, HighestBridges).

Royal Gorge officials measured the bridge after hearing about Sakowski’s findings and came up with a new number themselves: 969 feet to the water. The 1,053-foot claim probably resulted from measuring to the top of the bridge’s towers, explains a spokeswoman who says there are no plans to take down the “highest bridge” advertisements, although she can “imagine we can still call ourselves the highest suspension bridge in America, and North America, and one of the highest in the world.”

Sakowski predicts a bridge in Mexico, when completed in 2012, will reach 1,280 feet into the sky, making it the highest on the continent, reports The Arizona Republic.