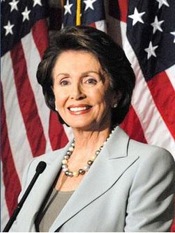 Joined by Congressman Jared Polis at the 1stBank Center, Pelosi claimed the stimulus has brought $482 million to 131 construction projects in Colorado. She also lauded a new, $10 million expansion project on U.S. Highway 36, saying it would get “a running start” and bring even more work to the state, notes Boulder’s Daily Camera.

“This project has been on the boards for the past 20 years,” Broomfield Mayor Pat Quinn said, praising the stimulus for finally bringing it to fruition.

But not everyone was as excited. Congressman Mike Coffman, an Aurora Republican, says he can’t understand “how Nancy Pelosi can in good conscience come to Colorado to tout the success of a bill that has wasted an unprecedented $862 billion in taxpayer money on over 9,000 earmarks and giveaways to ‘create’ jobs which have simply not materialized” (via the Denver Business Journal).