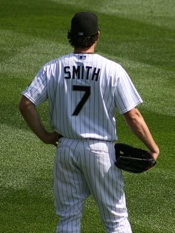 As much as a baseball team can set the tone for the season with the first game of spring training, the Colorado Rockies are geared up for a very good run.

Reserve outfielder Seth Smith looked to be in mid-season form as he belted a single, a double, and a three-run homerun against the Arizona Diamondbacks yesterday, proving he’s likely ready to go. Smith, however, could care less that he was a triple short of hitting for the cycle.

The Denver Post quotes backup first baseman Jason Giambi as saying Smith could start for any other team in the league and that with the depth of talent on the Rockies and the way manager Jim Tracy mixes and matches, “everyone in here should have a career year.”

The pitchers showed promise, as well, with starter Jason Hammel and Jorge De La Rosa looking sharp (via MLB.com). Reliever Manuel Corpas looked OK, but showed that he’s going to need some work over the next month. Still, there are signs that the Rockies are in a solid position to live up to all the hype that has surrounded them in the off-season.

Todd Helton, the star first baseman who has been with the team for some time, tells USA Today he’s been part of the team when it’s given up an average of six runs per game, but also when the pitching staff was ranked 10th in the league and pretty damn good. Given all that institutional knowledge, it’s meaningful when Helton says this could be the best pitching staff he’s played with in more than 10 years.