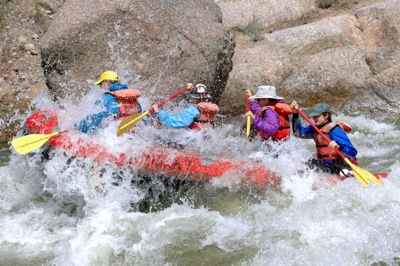 The future of the whitewater rafting industry in Colorado remains murky, despite the passage of a bill that seeks to preserve the rights of rafters and boaters to float rivers through private lands.

The Denver Post notes that House Bill 1188—the “River Outfitters Navigation Bill”—has been watered down so the issue can be studied by the Colorado Water Congress, a private group of lawyers and others who may lean toward granting landowners the right to decide who may float down rivers that cut through their properties.

The Durango Herald writes that the issue is in dire need of clarification: The state constitution hold that rivers and streams belong to the public, but a 1979 state Supreme Court case found a man guilty of trespassing for walking on a riverbed along private property. The original House bill would have granted floating rights only to commercial rafting companies, but over time that provision was removed.

Democratic state Senator Chris Romer is opposed to sending the bill to the water congress, saying the legislature is just trying to dodge a tough decision. “We’re getting balls thrown at us and instead of standing up and playing ball, we’re ducking,” he says (listen via KRCC radio). “We’re playing dodgeball.”