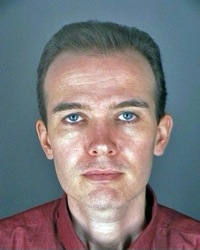 John Mark Karr, the guy who was famously arrested in Thailand and brought to Boulder after falsely confessing to killing JonBenét Ramsey in 2006, is allegedly now a woman, according to Inside Edition, which leaves many questions unanswered.

IE shows a photo of Karr and another picture of what appears to be a woman, claiming the latter is the first photo of Karr as a woman from his Facebook page. IE also claims Karr has changed his name to Alexis Reich, the conclusion of a long gender-changing process that Karr allegedly began in 2006 (the year in which this mug shot was taken) by taking female hormones.

Usually such rumors spread like wildfire in cyberspace, but yesterday there seemed to be fewer takers than usual for such a salacious bit. Westword links to IE’s piece but with a heavy dose of skepticism that almost reads like a disclaimer.

“Inside Edition isn’t the most transparent of journalistic operations,” the newsweekly writes. “It presents a photo from what’s described as Karr’s Facebook page, but it doesn’t include a link—and no page listed under either Karr or Reich turned up with this image during a search conducted moments ago. Moreover, the IE piece mentions court documents that aren’t supplied, either.”