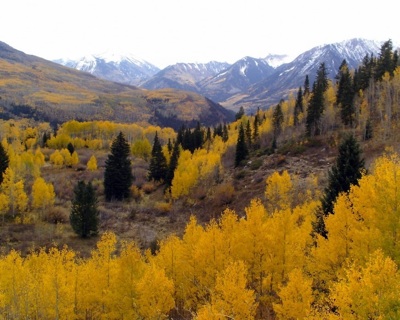 As the Glenwood Springs Post Independent writes in a recent story, “Relations between the granola heads and motor heads are thawing.” The two groups were at odds last year over the Hidden Gems Wilderness Campaign, a plan that seeks to protect large swaths of pristine backcountry. But representatives from myriad groups—conservationists, rock climbers, ranchers, snowmobilers—have hashed out some of their differences and might just have come to a compromise that makes everyone happy. Conservationists, who wanted to designate about 625 square miles of public land, are whittling it down in the hopes of satisfying recreational users and the Colorado Army National Guard, which uses land in the region for a High-Altitude Army Aviation Training program, according to BusinessWeek. While negotiating that issue, the wilderness group is also seeking ways to prevent oil and gas development on the lands that would be removed from the proposal, perhaps through buying mineral companies out of their stakes on the land. The next step is to find supporters in Congress. Still, opponents remain, such as the White River Forest Alliance. “Right now, even with the changes they’ve made, the organization is still in opposition but hopes that through a collaborative effort more changes will be made,” says Jack Albright, vice president for WRFA. Meanwhile, Aspen Daily News has been profiling the “Gem of the Week,” exploring areas proposed for protection. The latest installment scopes out Treasure Mountain, Gallo Hill, and McClure Pass (pictured).