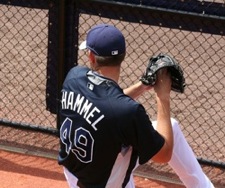 When Huston Street, the Colorado Rockies’ $23 million closer, developed soreness in his throwing shoulder last week, the team announced that Street would start the season on the disabled list. Other pitchers, like Franklin Morales and Manny Corpas, would be called on to fill in for him, and the team would be fine.

Then on Friday, Street’s MRI came back negative, showing no major damage to the multi-million-dollar joint (via The Associated Press). There’s no real timetable for Street’s return, but the other Rockies pitchers seem to be doing well and building confidence.

Jason Hammel tells The Denver Post he’ll be disappointed in himself if he doesn’t win 13 to 15 games this season, saying the 10 games he won last year as the team’s fifth starter was just the beginning of his success. The prediction is bold: Hammel was a bullpen-at-best pitcher for the Tampa Bay Rays prior to the 2009 season before being traded to the Rockies for a young pitching prospect. Still, it isn’t all that unlikely, given Hammel’s renewed command of his devastating curve ball.

The Post’s Troy Renck counts Hammel as one of the team’s two “surprise players” this year, guys who will step up big and help the team win its first division crown. The other? Third baseman Ian Stewart, who Renck predicts will hit .270 with 30 homeruns and knocking in 95 runs. That’s a risky forecast for a player who experienced atrocious slumps last year, although one who seems to have serious potential.