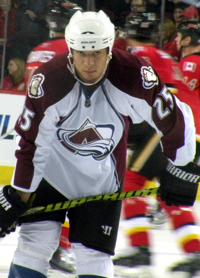 At the beginning of the 2009-10 Colorado Avalanche season, a few players probably came to mind as the most likely to lead the team in scoring once the puck stopped.

Perhaps veteran Milan Hejduk, who scored 50 goals in the 2002-03 season, or Paul Stastny, the University of Denver star and highest-paid Avalanche player. Or maybe even rookie sensation Matt Duchene, who leads all NHL rookies in goals (23) and points (52) (via NHL.com).

It turns out that with seven games left and a playoff spot on the line, the team’s leading scorer is winger Chris Stewart, the scrappy Canadian who was demoted earlier this season to the Avalanche’s minor league team but came back refreshed and ready to contribute.

Stewart’s 28 goals heading into tonight’s crucial game at the Pepsi Center against the Anaheim Ducks can be seen as another notch in the long and somewhat-unlikely road Stewart has taken to get where he is.

The 22-year-old has an older brother and five younger sisters and comes from a hard-working family from Toronto, according to a lengthy profile in The Denver Post. Stewart’s brother, Anthony, always won more attention on the ice, with Chris forced to take hand-me-downs and live in his brother’s shadow. But as Stewart considered pursuing football as his path to athletic glory, his brother helped him get a spot playing Canadian hockey for Kingston.

Over time, Stewart became more rounded, and the Avs selected him in the first round of the 2006 entry draft. Now, he’s among the stable of young Avs stars—including Duchene, rookie T.J. Galiardi, Stastny, Ryan O’Reilly, and Peter Mueller—who will likely form the core of the team for years to come.