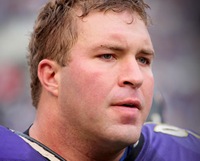 The Denver Broncos are in the process of undergoing some significant changes, shedding players and adding several new ones, including at least one who’s very familiar with Colorado. Free agent defensive lineman Justin Bannan signed with the Broncos Friday night, along with defensive back Nathan Jones (via DenverBroncos.com).

Bannan (pictured) started all four years for the University of Colorado before heading to the Buffalo Bills and then the Baltimore Ravens, where he has played for the last four years. He seems like a good guy, but his numbers won’t blow your socks off: In 113 career games, he has just 27 starts with 230 tackles, 5.5 sacks, and one interception.

Jones will help the Broncos as the fifth defensive back on pass defense, filling the spot played by veteran Ty Law last year, which Alphonso Smith was drafted during last year’s first round to play. The move shows the Broncos aren’t jazzed about Smith’s development, so it could make for an interesting position to watch. The Broncos also re-signed running back J.J. Arrington, which the team did last year, as well, despite the fact he was recovering from knee surgery, points out The Denver Post.

And, of course, there’s also the case of wide receiver Brandon Marshall. The strongest bidder so far seems to be the Seattle Seahawks. Marshall paid a visit to the team over the weekend, but it’s unclear whether Seattle is willing to give up the sixth pick in next month’s NFL draft for Marshall, which is what it would take to sign him.

The National Football Post reports that the Broncos won’t budge on exchanging a solid first-round pick in return for Marshall, but the Seahawks may not be the only team trying to land the mercurial receiver. The Seattle Post Intelligencer thinks the Seahawks will probably make the deal, despite Marshall’s considerable baggage.