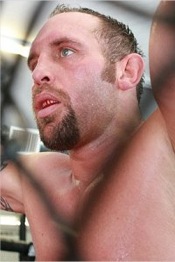 Greeley’s Shane Carwin has two jobs. By most days, he’s a full-time engineer with degrees in environmental technology from Western State College and mechanical engineering from the Colorado School of Mines. But for the sake of his other job, he’s the definition of a bruiser: 6-foot-4-inches, 260 pounds, and the nation’s sixth-ranked heavyweight in mixed martial arts.

Carwin loves both careers and has the opportunity to reach new heights this weekend as he takes on Frank Mir in the Ultimate Fighting Championship 111 in Newark, New Jersey. The winner of the fight will get an interim title belt, but they’re really fighting to take on Brock Lesnar, the top fighter in the UFC, later this year.

Carwin tells the British newspaper The Mirror, “I am excited to fight Mir, but the interim title doesn’t mean anything to me. I want the championship. That is why I am here, fighting in the UFC.”