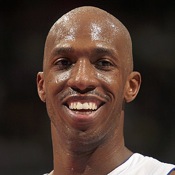 After losing two consecutive games last week and despite perhaps one of the worst remaining schedules in the NBA, the Denver Nuggets have been on cruise control, winning eight of their last 10 games and six in a row heading into tonight’s tough match-up against the Houston Rockets (6:30 p.m., Altitude).

Their last win came Saturday night in a beat-down of the Memphis Grizzlies, with the enigmatic J.R. Smith scoring 30 points to lead the way for the Nuggets. Smith went crazy that night, hitting seven three-pointers and making 19 of his total points in the second half, notes The Associated Press.

The Nuggets are now a half-game ahead of the Dallas Mavericks for second place in the Western Conference and three games up on the Utah Jazz in the Northwest Division. Perhaps the most interesting fact from the current NBA.com standings is that the Nuggets are just three games behind the Los Angeles Lakers for the top spot in the Western Conference, with one game remaining against LA in Denver. The Lakers are just 6-4 in their last 10 games and, despite Kobe Bryant, are entirely beatable.

As things become more difficult, the Nuggets will be under more pressure to perform without head coach George Karl, who continues to undergo intensive treatment for neck and throat cancer. The Denver Post reports that he’s hoping to be back on the bench tomorrow night at the Pepsi Center against the Washington Wizards, but there’s no guarantee. Assistant coach Adrian Dantley is doing well filling in for his boss, with a 4-0 record so far.