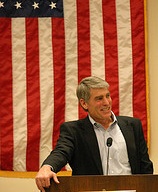 Left-leaning news sites lit up when it became clear that U.S. Senator Mark Udall is no longer a hold-out on the issue of including a so-called “public option” in any health-care-reform package. DailyKos nabs a statement from Udall’s office explaining that “if such a plan comes up for a vote under the reconciliation process, he would vote for it” (via ColoradoPols).

Udall, a Democrat, isn’t alone among senators backing a government-sponsored plan that would help people who could not otherwise afford insurance—the same idea being pushed by Colorado’s other Democratic senator, Michael Bennet.

More than 30 senators now support the plan, notes AlterNet, “and the pressure is mounting.” U.S. House Speaker Nancy Pelosi recently chided President Barack Obama for backtracking on the public option, a measure he touted on the campaign trail.

And Talking Points Memo offers a look at four Republican proposals the president is willing to include in health-care reform.

“My ideas have been informed by discussions with Republicans and Democrats, doctors and nurses, health care experts, and everyday Americans,” Obama writes. “Both parties agree that the health care status quo is unsustainable.”