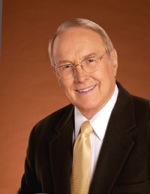 Earlier this month, James Dobson, the man who founded the conservative Focus on the Family ministry in Colorado Springs, left his most coveted pulpit—Focus’ radio show—to start an independent radio program with his son, Ryan. Now Ken Hutcherson, who leads Antioch Bible church in Washington and is a loyal friend of Dobson’s, wonders in a WorldNetDaily column whether Dobson was ousted by Focus’ board of directors as the organization attempts to forge a less divisive path (such as the Tim Tebow Super Bowl commercial, which was so soft on the anti-abortion theme that many viewers seemed to have missed the point). “Taking him off the air effective this month was not Dr. Dobson’s decision but a board decision,” Hutcherson writes. “Why was that decision made? What prayerful consideration did the board engage in that ended with their choice to remove Dr. Dobson from the air? Evidently, he didn’t want to stop his voice from being heard over the airways after turning over leadership to the new team. The new radio program he is launching tells me that.” Talking Points Memo received a statement from Focus about Hutcherson’s column: “We admire Reverend Hutcherson and the good work he has done for the cause of Christ and in support of families. He is, of course, entitled to his own opinion about the work we do, whether we agree with that opinion or not.” Jim Daly, a longtime Focus leader, who has replaced Dobson at the helm of the ministry, is clearly doing things differently than the highly political Dobson, known for his conservative crusades. For instance, Daly has praised President Barack Obama for his devotion to family and last summer attended a White House event. Hutcherson says of Obama: “The man believes in partial birth abortion. [Attending a White House event is] something that never would have happened if Dr. Dobson were there.”