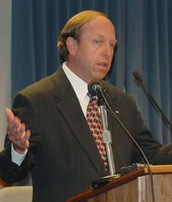 Count Colorado Attorney General John Suthers among the politicos who don’t like the health-care-reform bill that President Barack Obama has yet to sign. Regardless, Suthers says he will join several states in a legal attempt to block it the complex historic legislation, which aims to make health care more accessible to Americans (via The Associated Press).

Suthers, a Republican, is holding strong despite the objections of his Democratic colleagues who control state government, including Governor Bill Ritter.

“Never before has Congress compelled Americans, under the threat of economic sanction, to purchase a particular product or service as a condition of living in this country,” Suthers claims, singling out a provision in which Americans will face penalties should they decide to forgo health insurance.

Senate Majority Leader John Morse, who points out that some 800,000 uninsured Colorado residents may benefit from the bill, dismisses Suthers’ action as the “ideology of the extreme right wing.” But Suthers isn’t alone. Plenty of other conservatives are adamant that the health-care bill will erode American freedoms.

Jon Caldara, president of the Independence Institute, says he’ll fight to place a measure on November’s ballot that would prevent the feds from mandating that Coloradans carry health insurance, reports The Denver Post.

Political campaigners on both sides are energized by the landmark Democratic victory, particularly in the Fourth Congressional District, currently held by Democrat Betsy Markey, writes The Wall Street Journal.

Meanwhile, did you think the so-called “public option” was dead? Activists lobbying U.S. Senator Michael Bennet don’t and hope to make their case as the bill returns to the Senate for approval this week (via The Denver Post).

No doubt too little has been said about how health reform might impact you. To that end, 9News explores the bill’s most immediate effects.