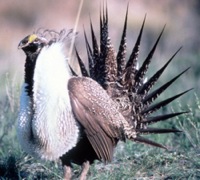 The U.S. Fish and Wildlife Service has announced that, for the time being, other species are more in need of a spot on the endangered species list than the sage grouse, meaning development of the West’s wind and oil industries can continue largely unfettered (via The Associated Press). The sage grouse population has declined by 90 percent from a century ago, although in the last decade the birds’ numbers have been relatively stable, thanks to preservation efforts in states such as Wyoming, Idaho, and Montana. Still, Interior Secretary Ken Salazar believes the bird merits protection and that “the decision provides a window of several years to continue working with states and others on conservation efforts that could head off a decision to list the sage grouse” (via the Grand Junction Sentinel). The Colorado Environmental Coalition is “encouraged” by the news, as the Bureau of Land Management has put forth a policy that identifies priority sage grouse habitat on which energy development will not be allowed. Meanwhile, a vote in the state Senate would require most large power companies to increase their renewable energy offerings from 20 percent to 30 percent by 2020, meaning Colorado could have the second highest such standard in the Unites States (via the Denver Business Journal).