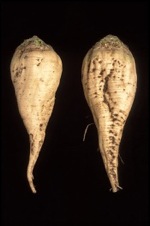 In November, when we last checked in on a crop that runs to the heart of Colorado agricultural history, sugar beet farmers north of Fort Collins were celebrating their largest harvest in recent memory. Since then, a beet war of sorts has been brewing in the courts, and it finally reached a conclusion Wednesday that has conservation and food-safety groups concerned.

U.S. District Judge Jeffrey White, of the Northern District of California in San Francisco, denied a request by Earthjustice and the Center for Food Safety for a preliminary injunction to stop the planting of sugar beet seeds genetically engineered to tolerate Roundup Ready herbicide (via the Denver Business Journal).

White reasoned that there were not enough conventional seeds for a full crop load this year and that a lack of seeds would lead to a shortage. Last year in North America, roughly 95 percent of all sugar beet acres planted Roundup Ready varieties. White is set to hear motions on a full ban of the seeds come July, notes The New York Times. An environmental review is part of that process and White says his verdict does not indicate any bias.

“The balance,” he says, “may likely shift when the court considers whether to issue a permanent injunction.”