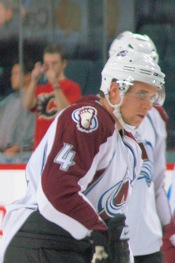 The NHL’s trading deadline is today at 1 p.m. local time, and it’s thought that the Colorado Avalanche might move fan-favorite defenseman John-Michael Liles. The Denver Post reports that although Liles’ name usually comes up at the trading deadline, he’s always stayed in Denver. But eventually, that has to start weighing on a player.

“You just try to put it in the back of your mind,” Liles says. “All you can control is how you play.”

Earlier this month, I pointed out the friction between Liles and first-year Avs coach Joe Sacco, who has preferred to start other players in Liles’ stead this year. Liles was a healthy scratch for five games in a seven-game stretch heading into the Olympic break, playing only when Adam Foote and Kyle Cumiskey forced Sacco’s hand.

Liles is in the second year of a four-year, $16.8 million contract, a factor that will complicate any trade scenario. But he’s still seen across the league as a quality, offensive-minded defenseman, and a deal is likely out there for the Avs to make.

Liles’ teammate Wojtek Wolski is also at the center of trade rumors. According to Mile High Hockey, even though Wolski is on pace to set a career-high in points, goals, and assists this year, he’s “not quite as good on the ice as his production indicates.” That seems like a contradiction, but the Web site posits that Wolksi has never fully realized his potential and the team is getting tired of waiting for it to happen.

“Avalanche [general manager] Greg Sherman would be crazy not to kick the tires on potential deals,” Mile High Hockey writes, especially if the Avs can land a solid winger. That would really help, considering the Avs have learned that budding star Brandon Yip will miss four to six weeks with a shoulder injury he suffered during Sunday’s loss to the Detroit Red Wings (via The Denver Post).