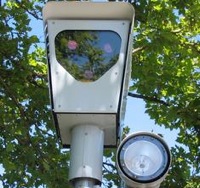 Despite qualms in other cities, Aurora has voted to vastly increase the number of red-light cameras that snap a picture of you and your license plate if you run a red light.

The city currently has four, but it will claim 14 by the time the new cameras are added, an effort to stop accidents at major intersections, say the Aurora City Council members who voted for the proposal Monday (via the Aurora Sentinel). Drivers who are caught will be fined $75.

While some council members praised the program, in other cities red-light cameras have been controversial or an administrative nightmare. In Pueblo, for instance, officials have recently reported problems in collecting the fines, points out 7News. Charlotte, North Carolina, scrapped its program in 2006, citing high operation costs.

In Tennessee, lawmakers are considering a bill to limit the placement of the cameras because of privacy concerns from vehicle drivers and passengers.

Aurora police chief Daniel Oates says such worries haven’t popped up on his radar: “My sense is people accept it. If you run a red light, you’re going to be held accountable.”