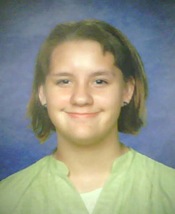 The search for Kayleah Wilson, the 12-year-old Greeley girl who went missing more than a week ago, continued over Easter weekend. Without a lot to go on, a 7News article, “How You Can Help Find Kayleah Wilson,” doesn’t offer much hope that Kayleah is all right, telling people to be on the lookout for a list of concerns that includes suspicious activities in or around abandoned homes.

April Wilson, Kayleah’s mother, joined in a prayer circle on Sunday at the Northern Colorado Cowboy Church, imploring for a good outcome, the Greeley Tribune writes.

The Denver Post reports that a Weld County Sheriff’s posse and volunteers scoured five locations Saturday, including ponds and a wooded area, but found no signs of the five-foot-one-inch, 145-pound girl.

In a separate article, the Post notes that police and FBI officials have received various leads on Kayleah, who is considered studious by those at Brentwood Middle School. She was last seen in a white and pink shirt over a white tank top, blue jeans, and white and red shoes.