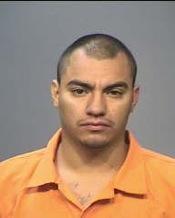 As we noted when Francis Hernandez’s trial began, the subject of his immigration status was hardly as important in court proceedings as it had been in the realm of public opinion. More critical was that the 26-year-old Guatemalan national drove an SUV at twice the speed limit, leading to a tragic crash that took the lives of Marten Kudlis (a three-year-old boy), Deborah Serecky, and Patricia Guntharp. Hernandez was sentenced to 60 years in prison after Marten’s father, Murat Kudlis, told the court, “We miss [Marten] very much. My wife is pregnant with a little girl, and she will never know her big brother” (via The Associated Press). Before Judge John Wheeler issued the sentence, Hernandez stepped up and read a letter, begging for mercy and pointing out that he had been called a baby killer. He talked about his own children: “I have two little girls who need me. I have to go home.” The Denver Post reports that the family of Marten Kudlis has also filed a civil suit seeking damages from Hernandez and his family; the family of Guntharp, who was high on methamphetamines at the time of the crash; the law enforcement agencies that arrested or cited Hernandez but did not report him to federal authorities for deportation; and others.