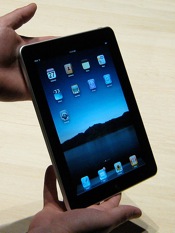 You can buy one of Apple’s latest must-have gizmos, the iPad, for $499. But is it worth an appendage? How about just a pinky?

That’s the question on Bill Jordan’s mind after he became the victim of a robbery in the Cherry Creek Mall (via 9News). As Jordan approached the mall exit, a crook made his move, grabbing Jordan’s bag.

“He was pulling with all of his might, probably thinking that he could just pull it out of my hand and be gone quickly. But the cord [of the bag] was wrapped around my finger,” says Jordan, now nursing a wrenched finger that was “opened up to the bone all the way to the top.”

His pinky had to be amputated at the knuckle.

The worst part is that the iPad wasn’t even for Jordan. He claims to know little about them, but his company asked him to pick one up as a gift for a co-worker.

Surveillance video obtained by Fox 31 shows the incident, for which Metro Denver Crimestoppers is offering a $2,000 reward for tips leading to capture or conviction in the case (call 720-913-STOP).