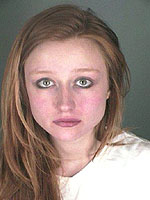 Bryan Beck’s eight-month-old puppy, a Shiba Inu formerly named “Rex,” snapped and growled at girlfriend Abby Toll, leading her to allegedly take revenge by binding the pup’s feet in packing tape and adhering it to the refrigerator. That was one year ago. Now, the Toll animal-cruelty case is finally in court, stirring strong emotions from Boulder police officer Rick French, who says he was so “caught off-guard” by the sight of the puppy struggling to free itself that he momentarily lost control of the scene he came to investigate, writes the Daily Camera. French allowed Beck to approach Toll during questioning so Beck could tell Toll to let the dog down. When Toll began to pull the animal off in a “brusque and abrupt” manner, French asked her to stop and detached the dog himself. “I’m not going to have this dog torn down and hurt any more than it appeared it already was,” he said. Toll, 21, faces a felony charge of aggravated cruelty to animals in the case, which received national attention last April. Toll’s attorney, George Kokus, told the jury that his client was a victim of domestic violence and hinted that Toll may not have been the one who bound the dog, though he admitted she did stick the animal to the fridge.