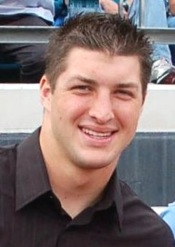 Before the NFL draft began last night, the consensus was that the Broncos needed to address the wide receiver position and continue to beef up a defense that wilted as last season progressed.

After trading picks back and forth and moving up and down, the Broncos selected Georgia Tech’s Demaryius Thomas, a 6-foot-3-inch, 225-pound wide receiver who they’re hoping can come in and fill the hole made when Brandon Marshall jumped ship (via The Denver Post). Sports Illustrated thinks the Broncos scored with Thomas.

But the Broncos’ second pick is rocking the football world and will cause considerable controversy among Broncos fans. The University of Florida’s Tim Tebow, one of the best college football players of all time and recent center of Super Bowl-commercial controversy, is now a Denver Bronco after the Broncos traded second, third, and fourth-round draft picks for him (via The Denver Post).

The move is so surprising given that the Broncos have an established quarterback in Kyle Orton and recently traded for a backup quarterback in Brady Quinn. Woody Paige thinks Tebow (pictured) is the perfect pick and loves the fact that coach Josh McDaniels has staked his future on the kid, saying the Broncos are relevant again for the first time since John Elway was quarterback.

Other observers don’t quite know what to think. Todd McShay, one of ESPN’s draft gurus, is one of them, saying last night: “To me, it’s very surprising. I’m not sure I come close to agreeing with that pick.”

A CBS Sports columnist isn’t as nice. “The league is laughing at Denver right now,” writes Mike Freeman. “The countdown till Josh McDaniels gets his ass canned has officially started.”